Confessions of the Founder - Part Two

When I first arrived at Brockton Hospital, I complained of intense headaches and chest pains. I asked for a pain killer. What the doctor prescribed was a mixture of olanzapine and lithium carbonate. It was a 'Molotov cocktail for the mind.' I never heard of either drug before.

I ditched the olanzapine quickly because it made me stutter, and the lithium caused hallucinations that were like 'waking dreams' in that they had no end. When I was on lithium I was not the same person, but doctors forced the drug on me as a condition for my continued enrollment at Bridgewater State College. I eventually declined that condition and opted to clear my name via the lawsuit I initiated in April 2007.

I finally broke my body's addiction to lithium carbonate during a two-week stint at a little motel somewhere in Connecticut in the winter of 2011. The pain was excruciating, but by that time I had no faith in privatized medicine of any kind. Doctors based their decisions about my health on both an imaginary psychosis and a fraudulent diagnosis created by a doctor who didn't examine me, and no one at anytime consulted with VA about my veteran status, or my medical history.

However, I don't hate the sinners because hating people solves nothing. I hate the sin, because I can hate demons all day and still be true to me. Who is responsible for the dirty tricks played on me? Satan. Who is on the hook for the evil acts of deceit and fraud committed against me? Satan.

As for the nearly indescribable agony I experienced during lithium withdrawal, the Destroyer's Data Mining Project is a means to an end. It was founded in April 2011 as the vehicle through which I would tell my stories after I cleared my name in court. The Destroyer is a dream deferred who's time has come, and the means by which I will 'exact my revenge' on he who is so richly deserving: Satan.

In the picture is the first shrine that I erected after I came off of the streets in 2011. The pill bottle to the right is one of the last bottles of lithium carbonate I was prescribed by a doctor at Rhode Island Hospital. 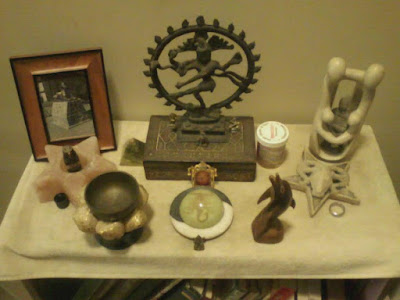