Before The Outbreak | Occupy Hades

In 2014 I was embroiled in conflict with property managers (a.k.a. an Agents of Satan) who represented organizations that were in charge of the property where I resided at the time. The drama began in July 2013, when my car was stolen.

The night before I came home early. It was Friday I parked my car in the parking lot of the apartment building where I live. The property had a well-lit parking lot guarded by a security guard. There were lots of surveillance cameras and the car was parked just outside of the front door as it is in this picture. Directly inside the inner door was the security guard's desk.

As I gazed stupidly at the empty parking spot, I felt a previously unknown rage grip my belly. Somebody stole my car out of a well lit parking lot, in spite of the many closed circuit security cameras on the property, and right from under the security guard's nose.

I walked across the street and filed a report with the Providence Police Department (PPD). Not long after the incident, my car was found in the parking lot of a supermarket in Willimantic, CT. It had been stripped of so many parts that it was no longer driveable. 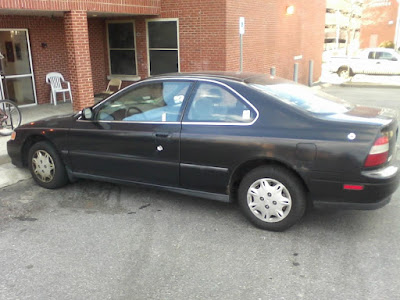